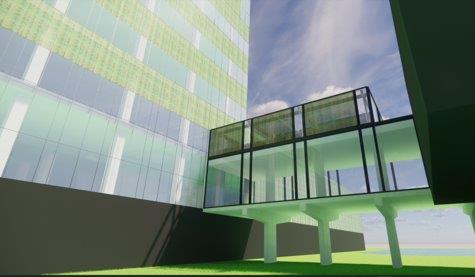 Two feasible options are suggested for the roof terrace on top of the bridge between Vertigo and Zwarte Doos. It creates an outdoor space where people can meet, relax and gather. In the future, a deeper investigation can be done about the exact costs and the final interior design regarding furniture and shading. Also, both the structure of the bridge itself and the structure of the roof terrace can be calculated in more detail, to make sure everything is strong enough.

The first option consists of the glulam portal frames. This frame in combination with steel stabilizer bracings maintain the scaffolding principle, while being much cheaper, lighter and more open than the initial design.The portal frames span approximately 8 meters in the cross section of the bridge. The beam on top extends till the glazing, dealing with the wind loads. The columns are placed one meter away from the glazing so that people would not cross on the opposite side, following the safety requirements. In the space in between the two, greenery can be placed that climbs up onto the structure which creates an eco-friendly aesthetic.

The second option is to use only the steel columns to support the glazing. The columns are fixed below the floor finishing, so that it can withstand the external wind loads. This concept reduces material usage, because there are no beams needed. Although, the columns are placed further outwards, so in order to respect the safety requirements, greenery and benches were placed in front of the column. The combination of having no beams and the columns placed further outwards creates a very spacious feeling, which can be seen in figure 14.